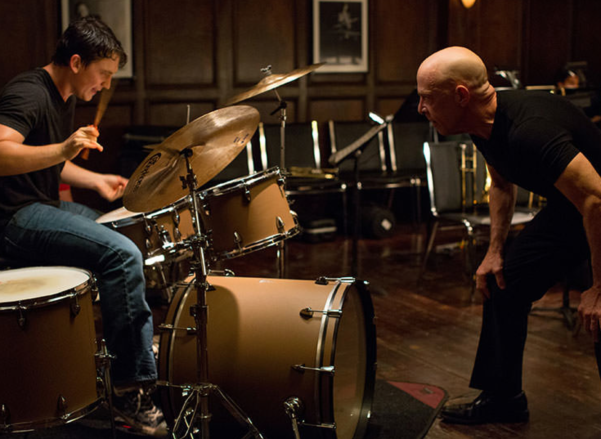 It’s not surprising to learn that “Whiplash” was filmed in 19 days. The brief timeframe speaks to both the surprising simplicity and intimacy of the film, as well as its intense tempo.

Tempo: That’s the key word. It’s a mad rush toward perfection and madness. But at what cost? That’s part of the reason that I wanted to include it on Justin’s Jobs. It’s a common theme of some of the best films this year: People who follow their passions to dangerous levels.

In the case of Andrew Neiman (played by a very focused Miles Teller), he wants to be the greatest drummer in the world. His goal — the same as many of his classmates at an elite music conservatory — is to play for infamous conductor Terence Fletcher, played by J.K. Simmons in a performance that is sure to earn him the Oscar for Best Supporting Actor. But Fletcher is a perfectionist — to the point of verbally and physically abusing his pupils. And this is where the heart of the movie lies: As a teacher or mentor, how much should you push to help someone achieve perfection? To achieve one’s greatness, to become the best in the world at something, what are you willing to do to achieve it? How much pressure are you willing to tolerate?

The relationship between Neiman and Fletcher is intense, and at times, cringeworthy. This is not a lighthearted film. You can even argue that there’s no “good guy” here. The characters’ obsessions make for some great music and an exciting plot line — and it left me wondering what would come of their tortured partnership. Will their tune have a happy ending? It all depends on the tempo.

← MONDAY MOVIES: “The Theory of Everything”
Working Out & Daily Disclipline →